The Summary Results (Part 1) of the 2016 Census of Population were released last week (6th April), with information on population, and corrections to the preliminary results, as well as a number of other statistics giving an overall picture of Irish society.  The infographic below, produced by the CSO, provides a picture of the data available. 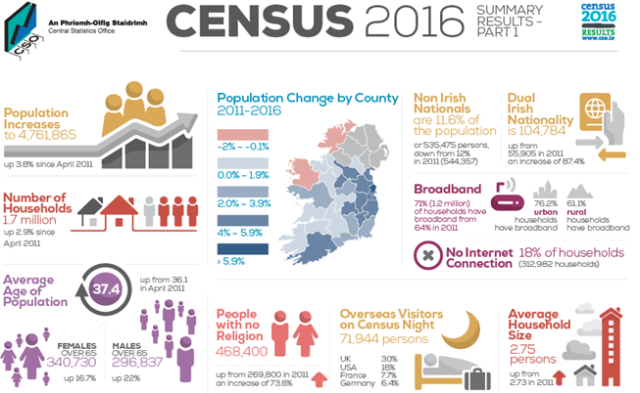 This post discusses some of the information available for the Western Region based on  data provided at county level.  As more detailed Profiles become available we will be able to present more information at Region, County and ED levels.

What is the population of the Western Region and how has it changed since 2011?

Since the release of the Preliminary Results which was discussed here  the population in most Western Region counties has been amended (in most cases it has been increased slightly, although Galway City population has been reduced)[1].  A notable change is that Sligo had, in the preliminary results, a marginal population decrease between 2011 and 2016 but in this corrected data it has actually shown a slight population increase.

Differences in Male and Female Populations

This difference in the patterns of male and female population growth relates in large part to different patterns of migration and more detailed information will be available on this in Profile 2 (Population Distribution and Movement, release due 11 May) and Profile 7 (Migration and Diversity, release due 21 September).  However, Table 3 below shows the differences in the male and female population in each county (using the standard measure of males per 100 females).  As would be expected, because women live longer, in the oldest age category (75+) there are significantly fewer males than females.  What is more unexpected is that the 30-44 age category has fewer men than women (unlike the age categories above and below it).  This indicates significant male migration in this age category.  Again, as more detail becomes available the different patterns can be better understood.  Galway City consistently has more females than males across the age categories.

In this Census 2016 Summary Report the population is not available at ED level.  It is expected that this will be contained in the forthcoming release for Profile 2- Population Distribution and Movements on 11th May.  Similarly, while the Summary Report discusses urban and rural population the detail is not provided at county level.

Some information is provided about age and the map below shows the difference in average age across Ireland.  The average age in the state is 37.4 but the average age is higher in more rural counties of the West and North West and in Kerry and Tipperary.  In fact Kerry and Mayo have the highest average age (both 40.2) followed closely by Leitrim (39.8), Roscommon (39.7) and Sligo (39.2) while the youngest is in Fingal at 34.3 years.

It is useful to examine the dependency ratios in the Western Region.  Dependents are defined for statistical purposes as people outside the normal working age of 15-64.  Dependency ratios are used to give a useful indication of the age structure of a population with young (0-14) and old (65+) shown as a percentage of the population of working age (i.e. 15-64).

Looking into the make up of this greater dependency the old age and young dependency ratios are shown in Figure 1.  Galway County has the highest young dependency in the region (36.1%) while Galway City has the lowest in the region (23.4%).  Most counties in the Western Region (except Sligo) have higher young dependencies than the State as a whole (32.3%) in part because of the loss of working age population through migration.  Similarly most Western Region counties also have higher old age dependencies than the state (20.4%) with Galway City once again the exception (15.6%).  The highest old age dependency is in Mayo (28.3%)

Figure 1: Old Age and Young dependency Ratios in the Western Region and State, 2016 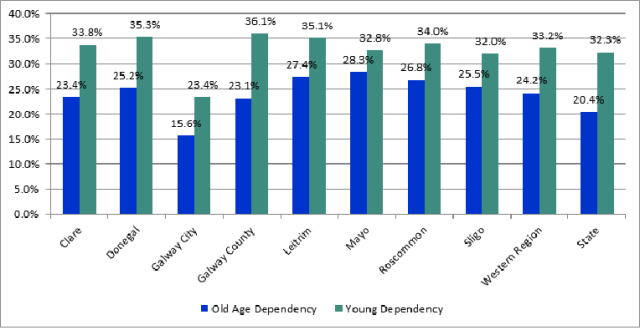 Over the coming months to December 2017 data from Census 2016 will be released under various headings.  This important information gives us the opportunity to better understand our region and its characteristics.  It is essential for policy and decision making, as well as to our understanding the differences among regions in relation to a variety of issues such as economic output, social transfers and the demand for different goods and services.  We look forward to analysing the future releases and to providing a better understanding of the Western Region throughout 2017.

[2] Rest of state refers to all the counties in the state except for the seven counties of the Western Region.

WDC Insights is the blog of the Western Development Commission Policy Analysis Team. The WDC Policy Analysis team analyses regional and rural issues, suggests solutions to regional difficulties and provides a regional perspective on national policy objectives. Policy Analysis Team Members are Deirdre Frost and Helen McHenry. We will both be posting here. You can contact us here, or use our firstnamelastname at wdc.ie Follow us on Twitter @WDCInsights
View all posts by WDC Insights →
This entry was posted in Population, Regional Statistics, Uncategorized and tagged Broadband, Business Demography, CSO data, Data, Western Region. Bookmark the permalink.