Even Nuttier about NUTS! 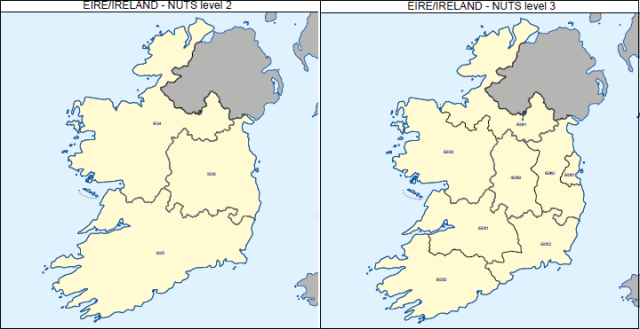 Like the UK leaving the EU, we are currently in something of a ‘transition period’ when it comes to regional statistics in Ireland, and while nowhere near as traumatic, it is causing a few problems and some confusion, namely:

Which NUTS3 regions? It is easy to tell the ‘new’ classification when it includes the NUTS2 regions.  If you see Northern & Western, Southern and Eastern & Midland you know it is the ‘new’ one.

However as the names of the NUTS3 regions remained unchanged, when you just see a list of the NUTS3 regions, it is not clear if the ‘old’ or ‘new’ classification is being used. A good example of how this can be confusing was the recent Census of Industrial Production 2016.  In this release data was provided for five NUTS3 regions (Border, Dublin, Mid-East, Midland and West) as the data for the South West, South East and Mid-East were suppressed for confidentiality reasons. No data was therefore given in the release publication for the NUTS2 regions. Reading the release it was not clear which regional classification was used and it was not included in the Background Notes to the release.  Only by going into Statbank to download the data, and seeing the NUTS2 regions of Northern & Western etc. listed was it clear that the ‘new’ classification was used.

When using the CSO’s Statbank system, a ‘Note’ will usually appear in a dialog box at the top of the page (see below), and also at the bottom of the spreadsheet you download indicating if the new regional classification is used.  If you are looking at a published CSO ‘Release’ such as the Adult Education Survey 2017, then the regional classification is usually included in the ‘Background Notes’.

Different data sources: While the CSO has adopted the ‘new’ regional classifications for all releases, this may not be true of all data providers.  Earlier this year the IDA issued its end of year results for 2018.  The results included data for the number of jobs in IDA-backed companies by region and the annual change.  The release did not specify which regional classification was used, so it was unclear if their ‘Border’ was the ‘old’ region including Louth or the ‘new’ region without Louth.

I got in touch with IDA and they confirmed they were continuing to use the ‘old’ regional structure as it aligned with their regional office structure, the regional targets set in their Strategy and current EU State Aid regulations.  Their intention is to switch to the new structures from 2020.

While this is very understandable, it does raise the possibility for some confusion and misunderstanding.  For example someone may compare total employment in the Border region in 2018 (derived from the LFS and using the ‘new’ regions) with employment in IDA companies (derived from IDA results and using the ‘old’ regions) without realising the two ‘Borders’ are not the same region.  This clearly illustrates the need for all data providers and users to state which regional classification is being used.

Time series: When releasing new regional data with the ‘new’ classifications, the CSO are (where applicable) issuing ‘backdated’ results for the ‘new’ regions to 2012, so for example in the CSO’s Statbank if you go to the Labour Force Survey, you can download data for the ‘new’ regions for each quarter from Q1 2012 to Q3 2018 (latest).  Clearly recoding and backdating massive data sets with new classifications is a time-consuming task and providing six years of time series data is very welcome.

However it does mean conducting time series analysis at regional level (except for the four ‘unchanged’ NUTS3 regions) further back than 2012 involves a break in the data at 2012.  This break in the time series can cause some confusion, an example was the Survey on Income and Living Conditions (SILC) published late last year. The CSO used the new classification for the 2017 release and backdated to 2012, with the data prior to that (2004-2011) using the old classification.  They noted this in the dialog box (see below) and download in Statbank and in the ‘Information Note’ for the release.  However, there were examples of commentary by people comparing the regional poverty data from 2008 and 2017 without making reference to the fact that for four of the eight regions, the data for the two periods was not directly comparable.

Also, while the CSO have committed to providing backdated time series for the new regions to 2012, it is not clear if all data providers will do the same.  Therefore it is important to check.

Coping with the transition!

Obviously over time this issue will largely resolve itself as the revised classification becomes the norm for all data and we move further away from the ‘break’ in the time series.  In the meantime however here are a few suggestions for coping with the transition:

While this may all seem a little pedantic, given the current interest in the impact of Brexit on the border economy, knowing if someone discussing data for the Border is discussing a Border including Louth (with Dundalk and Drogheda) or a Border excluding Louth, could make quite a lot of difference.

WDC Insights is the blog of the Western Development Commission Policy Analysis Team. The WDC Policy Analysis team analyses regional and rural issues, suggests solutions to regional difficulties and provides a regional perspective on national policy objectives. Policy Analysis Team Members are Deirdre Frost and Helen McHenry. We will both be posting here. You can contact us here, or use our firstnamelastname at wdc.ie Follow us on Twitter @WDCInsights
View all posts by WDC Insights →
This entry was posted in Regional Statistics, Uncategorized and tagged CSO, CSO data, Data, NUTS, Regional Data, regional disparity, Regional Statistics. Bookmark the permalink.