Anyone not familiar with regional policy or regional statistics always gets a bit of a laugh when we start talking about NUTS. It actually stands for Nomenclature of Territorial Units for Statistics (NUTS) and this system of defining territorial units for statistics across the EU was created by Eurostat. The NUTS classification got legal status in 2003.

The concept of NUTS is that each country in the EU is divided into different territorial areas at descending levels. So in the case of Ireland, the country as a whole is classified as NUTS Level 1, this is then broken into a number of large regions which are NUTS Level 2 (or NUTS2), these are further broken into smaller regions which are NUTS Level 3 (or NUTS3) and then local authority areas are below that (called LAU, or Local Administrative Unit).

In 2003, when the NUTS categories were introduced, Ireland was divided into two NUTS2 regions – the Southern & Eastern region and the Border, Midland & West region (called the BMW which also raised a few laughs). These two larger regions were further sub-divided into eight smaller NUTS3 regions.

When the 2014 Local Government Act was introduced, which made a number of changes to administrative boundaries in Ireland, the Government through the CSO applied to Eurostat to revise Ireland’s NUTS2 and NUTS3 statistical regions to match these new boundaries. The changes to the NUTS boundaries were given legal status in 2016.

Much of the data published by the CSO does not include any regional breakdown, but gradually the CSO will begin to apply the new regional classification to data which it does publish on a regional basis. One of the most anticipated will be the County Incomes and Regional GDP data which we have blogged about previously.

What are the new NUTS?

Instead of two NUTS2 regions, Ireland is now divided into three NUTS2 regions. These correspond to the areas covered by the three Regional Assemblies established under the 2014 Act – Northern & Western, Southern, Eastern & Midland . In the Map below these are coloured in blue, red/orange and green respectively. 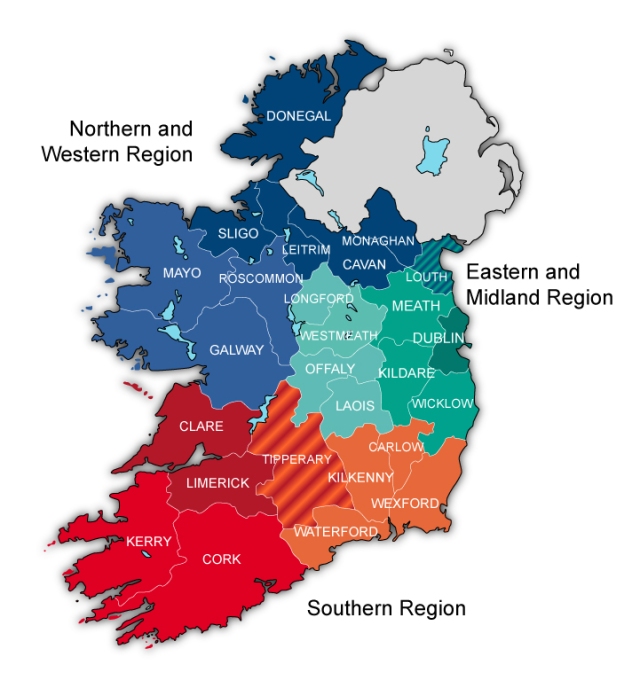 Map of new NUTS2 and NUTS3 regions in Ireland. Louth and Tipperary are cross-hatched to indicate their move from one NUTS3 region to another. Source: Reverb Studios/NWRA https://blog.reverbstudios.ie/2016/04/27/ireland-regions-map-vector/

The new structure is:

The CSO has published an Information Note on the revisions.

The introduction of the new regional statistical areas has a number of implications. As the three Regional Assemblies are responsible for developing and implementing new Regional Spatial & Economic Strategies (to give effect to the National Planning Framework at regional level), having access to official statistics which align with this regional structure will be invaluable in the finalisation of the RSES and their ongoing monitoring.

As the three NUTS2 regions are now smaller than the previous two NUTS2 regions it may be easier to identify and understand differences and comparisons among the regions. Some statistics are only published at the NUTS2 level, such as expenditure on Research & Development, and previously interpretation of this data was somewhat meaningless given the huge disparity between the BMW region (with one university) and the Southern & Eastern region (with all the others). The three new regions may provide additional insights.

At the same time, looking at the NUTS2 level can hide very considerable inter-regional differences probably most apparent in the Eastern & Midland region. The latest Labour Force Survey showed an unemployment rate of 5.3% in Dublin compared with 8% in the Midland region. This highlights the value of analysis at the NUTS3 regional level.

The movement of county Louth from the Border NUTS3 region to the Mid-East NUTS3 region is probably the most significant change. Given Louth’s location on the Dublin-Belfast corridor and its key role within Dublin’s catchment, it always made sense to include it, along with Wicklow, Kildare and Meath, as part of the Greater Dublin Area, however statistically this was not possible as it was included in the Border region which stretched across to Donegal. Louth’s inclusion in the Border region made this one of the most heterogeneous NUTS3 regions, and its statistics among the most difficult to interpret at times. It will be interesting to see the impact of Louth’s move on both regions.

WDC Insights is the blog of the Western Development Commission Policy Analysis Team. The WDC Policy Analysis team analyses regional and rural issues, suggests solutions to regional difficulties and provides a regional perspective on national policy objectives. Policy Analysis Team Members are Deirdre Frost and Helen McHenry. We will both be posting here. You can contact us here, or use our firstnamelastname at wdc.ie Follow us on Twitter @WDCInsights
View all posts by WDC Insights →
This entry was posted in Regional Statistics and tagged CSO, Data, Regional policy, Regional Statistics, Statistics, Western Region. Bookmark the permalink.